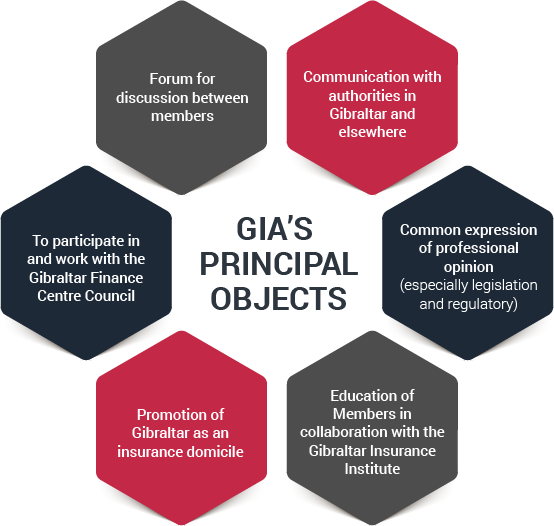 Membership includes insurance and reinsurance companies, insurance company managers, life and general insurance intermediaries, operating within Gibraltar and in international markets, as well as other professional firms forming part of the Gibraltar insurance arena. The GIA therefore represents a substantial majority of all industry operators.

With such a broad church, the GIA is committed to being an over-arching organisation which effectively represents all the diverse elements of the insurance industry in Gibraltar.

The Gibraltar Insurance Association is the Gibraltar insurance industry’s recognised industry body. It was established in its original form in 1997, in the context of Gibraltar’s accession to the Single European Market for insurance, and the recognition of the opportunities for growth that offered Gibraltar as an insurance domicile.

Gibraltar in those days accommodated no more than a dozen insurance companies, which has now grown to over 60 companies.

The GIA (then the Association of Gibraltar Insurers and Managers, or AGIM) and its core members at the time were very instrumental in the marketing of Gibraltar as an insurance domicile. They worked closely with Government, who had only recently set up their Finance Centre department which employed the services of Anthony Fisher to fully take advantage of Gibraltar’s developing position in Europe. Once Gibraltar had access to the single European market, the gloves were off, and AGIM lobbied Government not only for marketing impetus, but also on various legislative issues of the day, working closely also with the Financial Services Commission.

Most notable of these was the passing of the Protected Cell Companies Ordinance in 2001, which led major players to establish in Gib, and not only opened up opportunities in a new area of business for Gibraltar (being the only domicile within Europe at the time that had such ground-breaking legislation in place), but also set a marker for the insurance world at large that Gibraltar’s doors were open for business with serious intent!

AGIM grew to incorporate the Insurance Intermediaries association, changing its name to GIA and in 2008 funded the establishment of the Gibraltar Insurance Institute (GII) which assumed primary responsibility for the educational and social aspects of the GIA’s remit. The GII in 2010 achieved affiliation with the worldwide Chartered Insurance Institute, the recognised educational body within the insurance industry, being the first overseas Institute to do so for 30 years.

The GIA today continues to work closely with Government and GFSC on issues of the moment, such as marketing and regulatory issues like Solvency II.The Chairman of GIA sits on the Gibraltar Finance Centre Council, the body which represents the Finance Industry generally in Gibraltar, and with which Government frequently consults on market-wide issues. On matters affecting only the insurance industry, Government will use GIA as it’s contact point for consultation and discussion.

The GIA has been instrumental in the success of the insurance sector in Gibraltar, and continues to play a vital role in Gibraltar’s insurance industry today.